Our son and his family experienced a dryer fire a couple of years ago.  No one was injured but they lost a lot of possessions including their hand stitched coasters.  This is the set of four to replace them.

The stitching is black-work.  There are multiple designs to choose from on Pinterest and in books.  It can be worked in other strong colours if you do not like the traditional black.  The design disappears into the fabric if you use light or medium shades of colour.  An alternative technique is cross stitch.

Unstitched Acrylic coasters can be found on line at Etsy and  Herschners.  They come with fabric only or a with fabric, a cross stitch design and threads.  This specific shape does not appear to be currently available but hexagonal ones are.  These are stitched on 14 count Aida cloth using one thread of DMC floss. 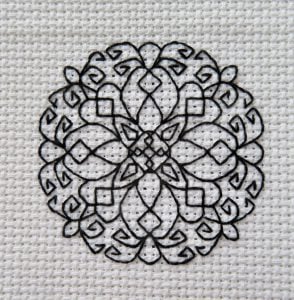 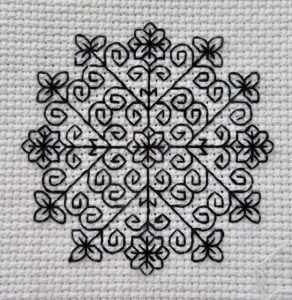 Here are the other three designs.  Accuracy is essential for blackwork stitching. I hope that you will not find any errors in these!

Black -work originated in Spain and was brought to England by Katherine of Aragon who was the first wife of Henry Vlll.  This marriage lasted around 25 years.  It was their failure to produce a healthy male heir that led to divorce and his remarriage to five subsequent wives.

Note the packing sequence of the cardboard inserts as this is the sequence of assembly.  You may need to use some extra glue to secure the cork base to the acrylic coaster.

You still have time to make a set of coasters before the festive season is upon us.  Enjoy!!!!

Today is Remembrance Day when we thank the millions of men and women who served in all the forces. We thank those who gave their lives so that our civilization would continue in the free world. We give thanks as countries and communities; we also remember and give thanks as individuals. 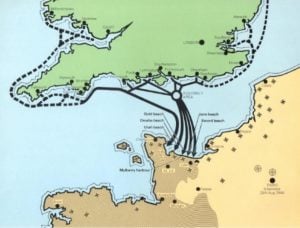 It was commemorated 40 years later in Portsmouth when Queen Elizabeth, the Queen Mother, opened the D-Day Museum. This building houses the Overlord Embroidery. Commisioned by Lord Dulverton, it was designed by Sandra Lawrence and stitched at the Royal School of Needlework. It consists of 34 panels each 8 feet wide by 3 feet high. The total length, 272 feet, is longer than the Bayeaux Tapestry by 41 feet. Here are a few of the panels of the Overlord Embroidery.

A vast armada of ships, planes and men crossed the English Channel to storm Fortress Europe. They were expected and encountered heavy resistance. Supplies had to be transported and the Mulberry Harbour was towed across the channel in sections and assembled on the French coast. There were multiple examples of ingenuity and selfless courage.

There were only a few days in each month with the right conditions of tide and moon for the invasion. Here troops of the British 3rd Division and the 27th Armoured Brigade await orders to sail.

The fleet moves slowly south towards the Normandy coast; some smaller craft sink in the rough water and others have to turn back. The armada includes some 4,200 landing ships and landing craft. R.A.F. Lancasters, which bombed the German coastal batteries, fly above the ships.

The embroidery technique used is a traditional method of applique which allows for detail, and the embroidery is intensely detailed. While a student at the Royal School of Needlework we were required to learn how to do this and I will tell you that it is both exacting and tedious. Whenever available the fabrics used were those used for the uniforms in the war. Notice the detail and expression in the faces. Sandra Lawrence used photos from the war and consulted with the original Chiefs of Staff on details for authenticity. As the panels were stitched in the ’70s, it was already more than 20 years since the end of the war.

An allied deception plan persuades the Germans that the invasion will be made at Pas de Calais. As the main fleet approaches Normandy the radar screens show the fake convoys proceeding up-Channel. Unsuspecting German troops man a bunker while a midget submarine surfaces to mark one of the invasion beaches by showing a green light to seaward.

King George V1 visits the invasion beaches with Winston Churchill, Field Marshal Brooke. Generals Eisenhower and Montgomery. They did not all visit on the same day as shown here. The Mulberry harbour is visible in the background.

The troops are moving out of Normandy on their way east. There remain eight months of bitter fighting before the conclusion of the war. A Frenchman, suspected of being a resistance fighter has been shot by the retreating Germans.

Currently the D-Day Museum in Portsmouth is being renovated, extended and a climate control system is being installed.  The Overlord Embroidery will be available for viewing in mid 2018. ( It is now open again). A new video is also being made of the embroidery which will include interviews with some of the stitchers. Our Guild has a copy of the original video. When I showed it last week in the residence where I live, there was a lot of interest. There are many veterans amongst us but I am not one of them. One lady, who was 18 years old when the war started and worked on Enigma, is trying to teach me how to salute correctly which is creating laughter all around.

The painted, full size plan designed by Sandra Lawrence is in the Pentagon hanging in the Ministry of Defence.

This video will give you more information on the creation of the Overlord Embroidery. You will likely locate others that I have not discovered.

Women in the D-Day Museum: The Overlord Embroidery – YouTube

The Norman Invasion under William the Conqueror in 1066 has been the only other successful cross Channel invasion. There is more to this story than I ever learned in school or has been generally known until recent years. I will be writing about this in following blogs.

All have been commemorated with embroideries.

Bev Malcolm is also a member of the Broiderers Group of Guelph.  Bev and her husband visited the Keukenhof Gardens in the Netherlands while on a tour.  They liked it so well they went back on their own and spent a day there.  It was such a good memory that Bev wanted to record it in stitching in order to enjoy it more permanently. 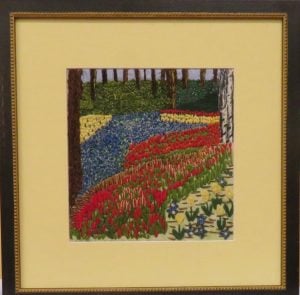 Bev took her inspiration from a photo her husband took of the gardens..  She used the techniques from Hand Stitch Recognizable Spring Flowers specifically Tulips and Muscari. 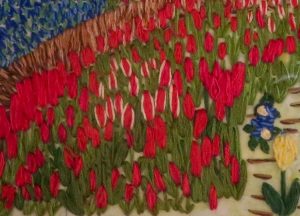 The embroidery is 8″ square.  The stitching is dense and it took her several months to complete.  Though if one stitches at our meetings only, it will inevitably take awhile to complete anything.  The fabric was mounted on a rectangular frame with a tight tension.  Despite the density of stitching, there was no puckering and it did not have to be stretched before being framed. 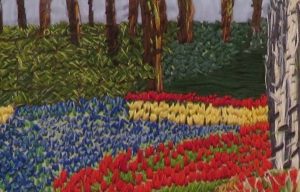 Her embroidery gives a good sense of the glory of the mass of spring colour in the Kukenhoff Gardens.  There is a picture of the original at the end of this posting where you will note that her embroidery is an interpretation and not, an exact copy.

I want to take a moment to talk about inspiration. Most of us start stitching with a kit.  Whatever it’s source, online, a store or a garage sale, it connects with our imaginations and urge to be creative.   A good quality kit is expensive.  By this, I mean that the designer knows how to stitch and the design is appropriate and stitchable, the directions are clearly written and the fabric and threads are of good quality.  You will enjoy working with this product and the result will please you.  Not all kits fit into these specifications.  This is an excellent way to learn how to embroider.

When experience and abilities have developed, we move on to trying an embroidery that is more personal.  It may not be an original but an ‘inspiration’ triggers a creative urge.  This is what happened for Bev.  The memory and visual experience of the Kukenhoff Gardens motivated her to stitch her memory.

It was not a ‘copy’; it is an interpretation using needle and thread.

Here is her Inspiration.  Go back and compare it with her interpretation. 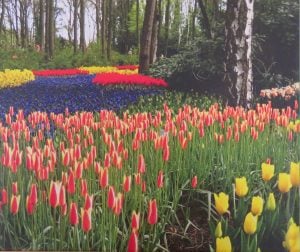 Thank you Bev for your inspiration and for sharing it with us.

Every Friday afternoon, year round, the Broiderers group meets.  We all live in The Village by the Arboretum in Guelph, Ontario.  Any resident who would like to stitch is welcome to join us.  Edna Miller is one of our regular and productive members.

This is her own original design.  The background is blue denim which is an excellent  fabric choice as it is densely woven and has good body.  She marked the skeleton of the design on the fabric using white chalk which disappeared as she stitched.  The details of the flowers are all stitched freehand.  She kept the whole design visible as she stitched so could see spacing and balance.  She mounted the fabric tightly on a rectangular frame and thus had no problems with puckering.  This has not been blocked and does not need to be blocked.  It is ready for mounting. 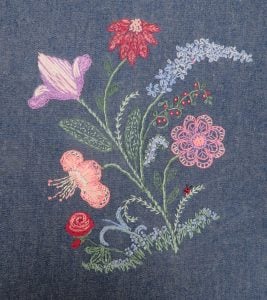 Edna used many different stitches and used them effectively.  Note her colour choices and how nothing disappears in to the background.  Notice of the spray of red berries on the right side.  It is obvious what they are but she has left spaces instead of stitching densely as she has for the pale blue flowers above. 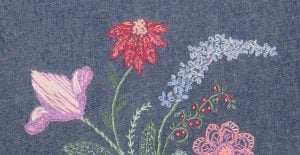 Meet Sebastian, the ladybug.  He is a piece of whimsy but he also balances the layout of reds in this piece.  He is so small he is hardly visible but, he serves his purpose of  bringing some red in to the lower part of the design.  He is a surprise when you find him.  Look at each colour in this composition and the triangular layout.  It gives balance and harmony to the whole.  The details give interest and make one look more closely to see what else one can find.

The peach centre of pink and mauve flower is unexpected and effective.  There is so much to see in this piece.  Every time I look at it I find something that I had not noticed before. 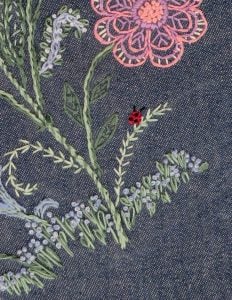 Edna intended this to be the side of a tote bag.  The Broiderers have all said that it was too nice to be used and risk getting dirty and worn out.  What do you think?

Congratulations Edna!  This is a creative and effective piece of stitching.


Connect with us socially