Interest and research has resulted in this series of blogs that features the Bayeux Tapestry and other embroideries that record the events of 1066 up until the Magna Carta. All have shaped the development of the western world and democracy. By influencing the western world, these events have affected the development of the whole world. The Overlord Embroidery, which records the D Day landings in 1944 is not included in this series but is featured in an earlier blog on this site. All these embroideries are unique. Only the Bayeux Tapestry is old whereas the others are contemporary. Here is your chance to be an armchair traveler and visit them all and to read the story that they portray.

1066 was a difficult year for Saxon England. King Edward the Confessor died in January without a direct heir creating opportunities for contestants to the crown. Earl Harold Godwinson (of Saxon aristocracy) promptly had himself crowned king which started a cascade of events. In mid-September, King Hadrada of Norway and a huge army of Vikings invaded northeast England resulting in the Battle of Fulford Gate which they won. The next and more decisive battle a few days later was the Battle of Stamford Bridge which was won by the Saxon army. Previous blogs have focused on these two battles. They have been edited and placed in context in this series.

The Prequel to the Battle of Hastings

Along with 1944, 1066 was a year that changed the destiny of the western world. We all know the outcome of the Battle of Hastings. The first half of the Bayeux Tapestry tells us what was happening before the battle. It must have been important to have been recorded in such detail. 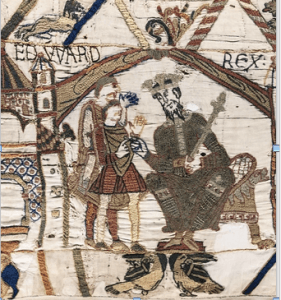 In the later years of his reign, King Edward the Confessor sent Earl Harold Godwinson on a visit to France probably to discuss the succession to the English throne with Duke William of Normandy.

Harold went to his country residence first and had a feast. From there he boarded the ship that would take him to France. Notice that he had to wade to get on board. He took his hawk and a hound with him as it was intended to be a friendly visit. 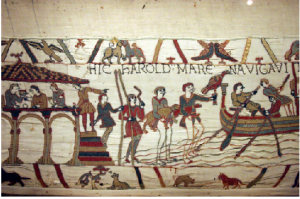 He was shipwrecked on the shores of northeast France and captured by Count Guy of Ponthieu.

Duke William hears about this and pays a ransom to have Harold released. Both Guy and Harold travel to William’s castle in Rouen (northwestern France) where they are received formally. After various travels and adventures around northern France and Normandy they all arrive in Bayeaux. Harold was very strong and at a beach, he pulled someone out of quicksand.(Nasty, dangerous stuff is quicksand).  This is one of the adventures recounted.

Duke William insists that Harold become his vassal. Harold swears his allegiance on the Holy Relics.

The two chests of relics are openly displayed and all appears to be peaceful.

Harold then returns to England where King Edward the Confessor is sick. He dies on January 6, 1066 and is buried in the newly built Westminster Abbey. This portion of the tapestry shows him being carried to Westminster Abbey which was consecrated a week before he died.

Note the ‘Hand of God’ coming down form heaven to consecrate the Abbey.

This is the tomb and shrine of Saint Edward the Confessor, the only king in English history to become a Saint. 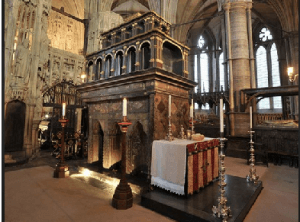 Harold is crowned King of England. 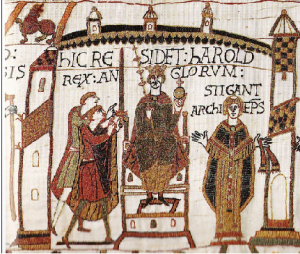 About Eastertime of that year, Halley’s comet appears, terrifies the western world and is seen as an omen. Did you see Haley’s comet in 1995 or 96? 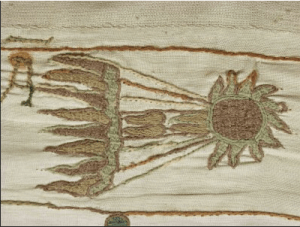 Duke William of Normandy was a more rightful contender to the throne of a prosperous and agricultural Saxon England. He was not amused that Harold had had himself crowned King at the first opportunity. Duke William spent all summer making extensive preparations for an invasion army of men, horses, ships, weapons and armour. The wind and tides were against him sailing. These same weather conditions favoured the Viking invasion on the north east coat of England.

All these pictures (except for the Shrine of Edward the Confessor), are taken from the Bayeux Tapestry.


Connect with us socially